Barbari in the 16th Century, Us and Them 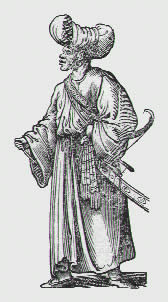 Andrew Borde’s The First Book of the Introduction of Knowledge (1547) describes the customs and manners of various nations, from the English and their neighbors to the Moors, the Turks, the Egyptians, and the Jews…

Below is what Borde has to say about Barbary – Northwest Africa.  Already present are the negative/positive dichotomies relating to ‘race’ and ‘religion’ – as construed at that time: Black (free and slaves) ‘vs’White; Christian ‘vs’ Muslem, etc.

This has led Westerners into various misunderstandings between ‘Us’ and ‘Them’, a topic I would like to return to at some point.  Just for now, think about how you automatically categorize many things and events into two categories.

Truth, in many cases, is construed in some non-Western cultures as negotiable or situational.  Was my umbrella stolen, borrowed or lost – may depend more upon who I am and who the taker is – the social context of the action – than action itself.  It is a kind of ‘game’ that I have learned to recognize and sometimes to referee – but never to play.

Like a language, I think that you have to be born into the culture to really understand many of the nuances and meanings.

So, here is how Borde categorized Moores in the 16th Century – categories that generally continued into colonial and modern times:

Barbary is a great country, and plentiful of fruit, wine, and corn. The inhabitors be called the Moors. There be white Moors and black Moors. They be infidels and unchristened. There be many Moors brought into Christendom, into great cities and towns, to be sold.

And Christian men do buy them, and they will be diligent, and will do all manner of service. But they be set most commonly to vile things. They be called slaves. They do gather grapes and figs, and with some of the figs they will wipe their tail, and put them in the frail…. They have great lips, and knotted hair, black and curled. Their skin is soft, and there is nothing white but their teeth and the white of the eye.

When a merchant or any other man do buy them, they be not all of one price, for some be better cheap than some; they be sold after as they can work and do their business. When they do die, they be cast into the water, or on a dunghill, that dogs and pies … and crows may eat them, except some of them that be christened: they be buried.

They do keep much of Mohammed’s law, as the Turks do. They have now a great captain called Barbarossa …which is a great warrior. They doth harm, divers times, to the Genoese, and to Provence and Languedoc, and other countries that do border on them, and for they will come over the straits, steal pigs, and geese, and other things.

Source:  The Norton Anthology of English Literature (this is a good source on the internet)

With a group of BaTwa (pygmy) women potters, with whom we've worked to enhance production and sales of their wonderful pots - fantastic for cooking and serving. To see the 2 blogs on this work enter 'batwa pots' into the search engine located just above this picture. Blog entries throughout this site are about Africa, as well as about the Middle East and life in general - reflecting over 35 years of work and research in Africa and the Middle East – Come and join me!
View all posts by dianabuja →
This entry was posted in Africa-North, History-General. Bookmark the permalink.