In rural Africa, major crops are not just for food.  A good food crop, whether indigenous or introduced is multipurpose – a fact that is often unknown or under-rated in modern agricultural research and development (R&D), which stresses the uses of food crops for FOOD for humans.  This is simply not the case in many pre-industrial societies in Africa and elsewhere.

The reality was first brought home to me a number of years ago in Egypt, where I conducted a year-long study of smallholder grain and dairy production, processing and distribution for IFPRI (International Food Policy Research Institute) and the Ford Foundation.

I knew already the importance of maize stocks in the Nile valley for use as fuel and animal fodder, as well as for building, and so was not surprised to learn that a major reason HYVs (high yielding varieties) of wheat were not readily accepted by smallholders was that the stocks of HYVs are much shorter than the traditionally used wheat, and due primarily to price controls farmers made more money off of wheat stocks (from traditional varieties of wheat) for animal food that off of the grains. 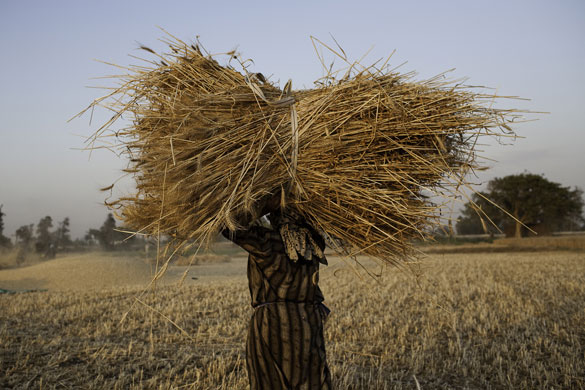 Wheat with long stocks, for animal food. Source: The Gardian

Thus, government and researchers’ goals of increasing wheat yields by means of HYVs were being ‘sabotaged’ by relative market demands of wheat ‘vs. wheat stocks, both for own use and in the market.  This finding was not well received in government circles.  However, had the initial research incorporated farmers into the choice of wheat varieties, and reasons for these choices, then the problem could have been addressed early on.  Now, fortunately, farmer incorporation into crop research is much more often the case. 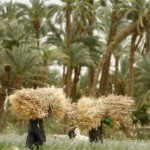 HYV wheat stocks could be half the length of these. Source: Reuters.com

In ancient Egypt, as well, the stocks of emmer would have been carefully saved for use with livestock: 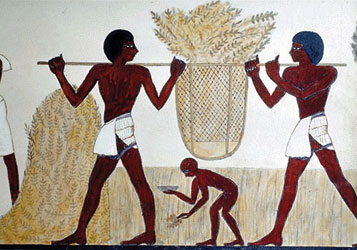 Another example of the importance of crops being multipurpose was detailed by the explorer Baker, in the 1860’s, while in northern Uganda searching for the Nile sources:

…although we were in a land of plantains, the ripe fruit was in the greatest scarcity. The natives invariably eat them unripe, the green fruit when boiled being a fair substitute for potatoes–the ripe plantains were used for brewing plantain cider [pombe beer], but they were never eaten. Throughout the country of Unyoro, plantains in various forms were the staple article of food, upon which the inhabitants placed more dependence than upon all other crops.

The green plantains were not only used as potatoes,  but when peeled they were cut in thin slices and dried in the  sun until crisp; in this state they were stored in the  granaries, and when required for use they were boiled into a  pulp and made into a most palatable soup or stew. Flour of  plantains was remarkably good; this was made by grinding  the fruit when dried as described; it was then, as usual with  all other articles in that country, most beautifully packed in  long narrow parcels, either formed of plantain bark or of the  white interior of rushes worked into mats. This bark served as brown paper, but had the advantage of being waterproof.

The fibre of the plantain formed both thread and cord, thus the principal requirements of the natives were supplied by this most useful tree.

The natives were exceedingly clever in working braid from the plantain fibre, which was of so fine a  texture that it had the appearance of a hair chain; nor could  the difference be detected without a close examination. Small bags netted with the same twine were most delicate, and in all that was produced in Unyoro there was a remarkably good taste displayed in the manufacture.

In the Kingdom of M’tesa [northern Uganda]

… There was no want of food here, for I never saw such a profusion of plantains anywhere.  They were literally lying in heaps on the ground, though the people were brewing pombe [local beer made of plantains] all day, and cooking them for dinner every evening.

… The queen mother sent me several dishes [plantain-leaves on which were placed] ]well-cooked beef and mutton, and a variety of vegetables, from her table, as well as a number of round moist napkins, made in the shape of wafers, from the freshly-drawn plantain fibres, to wash the hands and face with 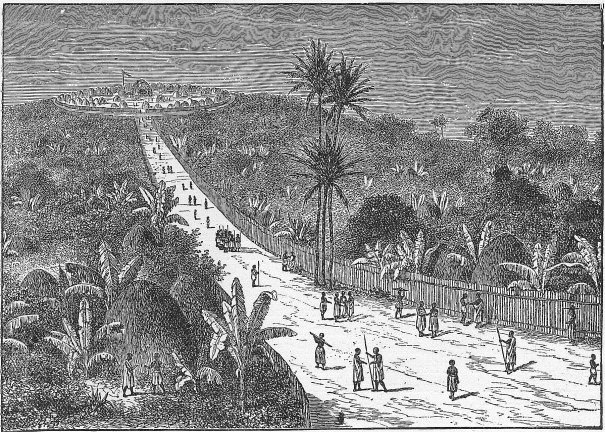 The capital of M'tesa's kingdom of Unyoro. Source: Heros of the Dark Continent.

… The king rose betimes in the morning and called me, unwashed and very uncomfortable, to picnic with him, during the collection of the boats.  The breakfast, eaten in the open court, consisted of sundry baskets of roast-beef and plantain-squash, folded in plantain-leaves.

The Albert N’Yanza, Great Basin of the Nile And Explorations of the Nile Sources.  by Sir Samuel W. Baker, M.A., F.R.G.S.  Gold Medallist of the Royal Geographical Society.

Plantain is no doubt one of the most versatile plants in the African tropics.  In a former blog I talked about how – a stew made of green bananas – is wrapped in the banana leaves and then steamed.  As plantains, their cousins, green bananas are also multipurpose.

Green bananas are wrapped in banana leaves and then steamed, the traditional dish of mutoké made at the Hotel on special occasions.

Sorghum and millet, grown in drier areas of Africa, are also multipurpose crops; I will talk about them in another blog.

With a group of BaTwa (pygmy) women potters, with whom we've worked to enhance production and sales of their wonderful pots - fantastic for cooking and serving. To see the 2 blogs on this work enter 'batwa pots' into the search engine located just above this picture. Blog entries throughout this site are about Africa, as well as about the Middle East and life in general - reflecting over 35 years of work and research in Africa and the Middle East – Come and join me!
View all posts by dianabuja →
This entry was posted in Africa-General, Egypt-Ancient, Egypt-Recent, Food, Indigenous crops & medicinal plants, Research & Development and tagged Cereal, Field Crops, Ford Foundation, Nile, Plantain, Wheat. Bookmark the permalink.