Burundi - A dot on the map of Africa. Wikipedia

Keeping the Peace in Burundi – by Working for Peace in  Somalia

Peace negotiations in Burundi have brought together all rebel groups and are associated with the long and complex process known as DDR (Disarmament – Demobilization – Reintegration), whereby several 100,000 rebels – as well as thousands of members of the army who now are in over-abundance – must be brought into some form of gainful employment or agricultural practice. 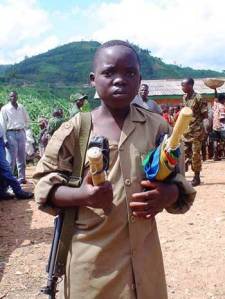 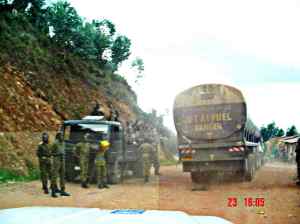 A rebel group that we met on the road - they are collecting 'taxes' from passing vehicles. This has been a major 'income-generating' activity for rebels... (I paid them about $10.00)

What we have learned over the past several years of working with reintegration approaches, is that neither ex-rebels or ex-soldiers want to return to the farm.  And very few want to be trained into a small enterprise.  Why?  Because their months or years with the military is generally viewed as gainful employment that translates into monthly salaries and a variety of benefits – health, housing, uniforms, etc.  And when there are no salaries to be had (as in the case of the rebel groups) then ‘gainful raiding’ is the next preferred option.

What to do?  There are not so many strategies with regard to ex-combatants, and so the following have been the most employed:

Assisting the Burundi military in training these troops is a little-known peace-keeping program that is run in a number of African countries by the United States.  Rather than focusing on offensive fighting skills, the program focuses on peace-keeping strategies and skills.  And in Somalia, that translates into defensive rather than offensive skills.

Over the past two years I have gotten to know both Burundian military and American military who are running the program.  The training is both in the  classroom and the field, and emphasizes strategies for the  protection of civilian populations, moving through hostile territory, first aid, care of victims of war trauma and of rape, working with civilian populations in war areas, and the like. 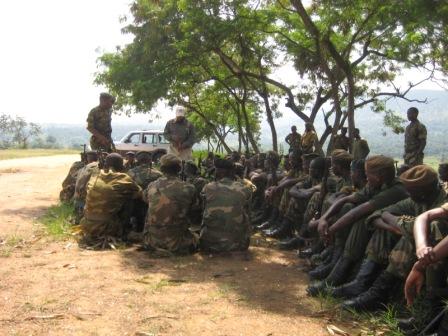 Time for lectures. All of the American ex-military serving in this program are French speakers.

Target practice, being led by one of the members of the American team - this time, a woman

I find this one of the more innovative programs that the US government is supporting in Africa.  Not exactly development…  The focus is on training in peace-keeping and at the same time provides an avenue to ‘gainfully employ’ many thousands of ex-rebels, now members of the Burundian military,  in peace-keeping operations outside of the country.  And having experience over 10 years of fighting and its associated destruction in Burundi, I am hopeful that the program will help to develop a cadre of military in the country that can help focus away for the awful events of the past and towards a more peaceful future.

After their training and tour of duty in Somalia these troops return to join and train in peace-keeping operations in the country and growing numbers are seeing that they do have a future after war – and that leaving the military for other occupations is possible.

In Burundi, the American trainers stay at the Hotel Club du Lac on the shores of Lake Tanganyika.

With a group of BaTwa (pygmy) women potters, with whom we've worked to enhance production and sales of their wonderful pots - fantastic for cooking and serving. To see the 2 blogs on this work enter 'batwa pots' into the search engine located just above this picture. Blog entries throughout this site are about Africa, as well as about the Middle East and life in general - reflecting over 35 years of work and research in Africa and the Middle East – Come and join me!
View all posts by dianabuja →
This entry was posted in Africa-General, After the War, Boy soldier, Burundi, Hotel Club du Lac Tanganyika2, Keeping the peace, Living here, Peace negotiations, War Games and tagged Africa, Africa-General, African Union, Agathon Rwasa, Burundi, Gatumba, Peacekeeping, somalia, United States, War Games. Bookmark the permalink.