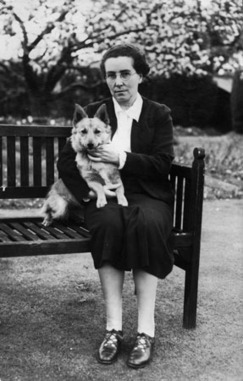 It took more than 700 years, but in 1939 archaeologist Dorothy Garrod became the first female professor at Oxbridge – nearly a decade before women were even allowed to take degrees at Cambridge University. ALICE HUTTON reports on the opening of the first permanent exhibition honouring one of the most important female academics you have probably never heard of.

It is hard to over-estimate the importance of what took place 73 years ago on May 5, 1939.

By unanimous vote, senior members of Cambridge University elected their candidate for the Disney Professor of Archaeology – a position that remains one of the most prestigious in the field.

A note was passed to the Vice-Chancellor, who legend has it replied: “Gentlemen, you have presented us with a problem.”

Because they had chosen Dorothy Garrod – the stand-out archaeologist in Britain at the time and by far the best candidate for the job.

Fingers drummed, heads scratched, because for all the university’s failings on sexual equality, they were eager to have her.

“They turned her into a man,” hoots Dr Pamela Jane Smith, a research fellow at the McDonald Institute for Archaeological Research at Cambridge, a 68-year-old academic whose PhD thesis resurrected Garrod’s accomplishments from the dusty folds of history.

“It was a conundrum, so in all correspondence they just dealt with her as a man and they used the ‘he’ pronoun.

“Many men wanted to change the laws banning women – even though they actually voted for her regardless of gender – so they found a way of dealing with the situation that everyone felt comfortable with.

“It might seem hilarious, but looking at the broader picture this was one of the key moments.

“She was the crack in the wall.”

And so it was that on her 47th birthday Garrod made history.

She remains to this day the only woman ever to be elected to the Disney Chair – named after archaeologist John Disney in 1851.

But what is even more extraordinary is that until the grand reopening of the university’s Museum of Archaeology and Anthropology last month after a £1.8 million revamp, there had never been an official, permanent exhibition celebrating her achievements.

Accomplishments that include not just her significant appointment, but changing the face of prehistoric archaeology with her incredible discoveries across the world and also becoming, along with many other hard-working activists, part of the reason women were finally admitted to Cambridge University in 1948 as equals.

With a group of BaTwa (pygmy) women potters, with whom we've worked to enhance production and sales of their wonderful pots - fantastic for cooking and serving. To see the 2 blogs on this work enter 'batwa pots' into the search engine located just above this picture. Blog entries throughout this site are about Africa, as well as about the Middle East and life in general - reflecting over 35 years of work and research in Africa and the Middle East – Come and join me!
View all posts by dianabuja →
This entry was posted in Education, Europe, Gender. Bookmark the permalink.