Posted on 23/11/2012 by dianabuja
Reposted for Thanksgiving 2012:
Several years ago, when still living in the big house by Lake Tanganyika, I organized a Thanksgiving celebration especially for members of the Burundian military who were so very helpful for us during those fighting years, together with a few friends who live here.

Beach house (6-sided) where I lived for 7 years until the place was sold; now I’m about a 5 min. walk away.  The dog on the right – Hindy – is a typical indigenous breed.  He’s still with us.

Putting the ingredients together was a bit of a challenge.  There are no turkeys here, so I organized to secure a bunch of wild Guinea Fowl from the nearby Rusizi Wetlands:

Guinea Fowl in the Rusizi Wetlands, about a 15 min drive down towards the Congo

The appropriate spices for turkey stuffing and for pumpkin pie do not exist, and so I made a stuffing that I learned in Kenya from my Kenyan colonial friends.  And for dessert, made a cornbread.  Burundians are not big sweets eaters, preferring fresh fruit, so we got lots of that, too.

I thought Southern-made yams with pineapple, etc, would be good, too.  But the Burundians found them too sweet!

Can’t remember what else – probably rice and lenga-lenga (amaranth) as a vegetable.

The guinea fowl were very tough but very tasty – folks here are used to tough fowl and rather like the chewing of them.

For entertainment I invited over from the village the boys drumming group – a great youth group that was organised and taught by a villager on a volunteer basis.  After their performance we gave them dinner and soda. 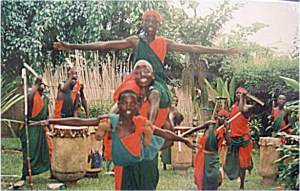 Boys’ drumming group from the village entertained us

Preparation, of course, took most of the day and, as usual, Omer was keen to learn new recipes

We ate and ate and ate – and drank and drank local banana beer that was brought by one of the guests, in addition to Belgian beer.  Folks were wild about the cornbread and so Omer gave them the recipe, which is also below.

We were well guarded; the ranking officer had organized guards on the beach (in front of us) and elsewhere.  Afterwards, the guards all got something to eat and some beer.

One guard patrolled on the beach in front of the compound.

Here are all of the recipes we used that day.  It was great fun!

Some of the guests – military, friends and neighbours.  Boys’ drummer group from the village performs in the background.

November is usually the best month to see the Congo – since it is the rainy season, the air and sky are much clearer:

From the compound’s lookout – Uvira, a lake-side town in the Congo, is straight ahead; the Rusizi Wetlands is to the right

With a group of BaTwa (pygmy) women potters, with whom we've worked to enhance production and sales of their wonderful pots - fantastic for cooking and serving. To see the 2 blogs on this work enter 'batwa pots' into the search engine located just above this picture. Blog entries throughout this site are about Africa, as well as about the Middle East and life in general - reflecting over 35 years of work and research in Africa and the Middle East – Come and join me!
View all posts by dianabuja →
This entry was posted in Africa-Central, Burundi, Cuisine, Food, Indigenous crops & medicinal plants, Living here, Recipes, War Games and tagged Burundi, candied sweet potatoes, cornbread, guinea fowl, Lake Tanganyika, linga-linga, Thanksgiving. Bookmark the permalink.