Cuisines and Crops of Africa, 18th Century: Food and Farming in Timbuktu 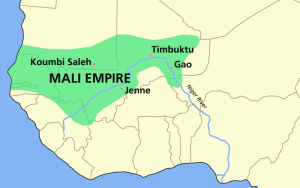 The empire of Mali, as other empires and city-states, of the region, straddled or were close to the Niger River floodplains. Source: Wikipedia

In about 1789, the merchant and voyager Abd Salam Shabeeny  set out from his home city, the Moroccan port town of Tetuan (above picture), for Germany in order to procure items for use in his trans-Saharan caravan trade business.  On the way he was captured, finally landing in England, where – before being returned to Morocco – he dictated:  ‘An Account of Timbuctoo and Housa Territories in the Interior of Africa.  1820′

Major trade routes both north and south of the Niger, linking regions from North Africa, south to the Atlantic Ocean. Source: Wikipedia

Shabeeny’s  narrative is filled with snippets about the life and times of a North African Muslim caravan merchant – who was part of the mercantile global economy of the period that included the Middle East, North and West Africa, southern areas of West Africa, and Europe.   His Account was eventually published by Mr James Grey Jackson in  1820, together with a variety of notes and correspondence from the period, relating to colonial events and aspirations  in West Africa.

The sections on crops and cuisines are brief, but insightful and several are given below.

First however, a little taste of  Hajj Shabeeny’s biography, which offers a fascinating window into West and North African  commerce and politics of the late 18th Century; as told to Mr. Johnson [my explanatory notes in square brackets]:

The person who communicated the following intelligence respecting Timbuctoo and Housa, is a Muselman, and a native of Tetuan [Moroccan port just across from Gibraltar – pictured above]…

… in the twenty-seventh year of his age, he proceeded from Tetuan as a pilgrim and merchant, with the caravan for Egypt to Mecca and Medina, and on his return, established himself as a merchant at Tétuan, his native place, from whence he embarked on board a vessel bound for Hamburgh, in order to purchase linens and other merchandize that were requisite for his commerce [ produce that would be sold to merchants for the caravan trade south to Timbuktu and Hausaland, which was the largest Sahelian ‘kingdom’ of the time].

Saharan Caravan on the march Algeria 1896.  Shabeeny would have traveled to Egypt in a similar caravan.  Source:  Royal Geographic Society.

On his return from Hamburgh in an English vessel, he was captured, and carried prisoner to Ostend, by a ship manned by Englishmen, but under Russian colours, the captain of which pretended that his Imperial mistress was at war with all Muselmen…

There he was released by the good offices of the British consul, Sir John Peters, and embarked once more in the same vessel, which, by the same mediation, was also released; but as the captain either was or pretended to be afraid of a second capture, El Hage Abd Salam was sent ashore at Dover [England], and is now, by the orders of government, to take his passage on board a king’s ship that will sail in a few days… [returning him to Morocco]

Passages on crops and cuisine, as quoted by Shabeeni:

Regarding the crops of Timbuktu: 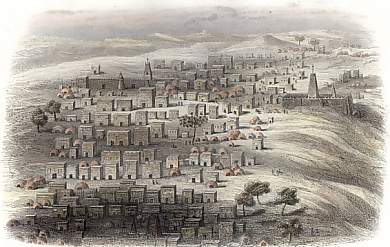 Timbuktu, Mali.  Steel engraving, 1868.   Source:  Probably based on the 1824 sketch by Rene Caillié, the first European to travel to Timbuktu and to bring back drawings of the town.

The country is well cultivated, except on the side of the desert. They have rice, el bishna [Indian corn], and a corn which they call allila [a species of millet] but in Barbary it is called drâh:  this requires very rich ground. They make bread of el bishna: they have no wheat or barley.

Bread-baking oven in Timbuktu, very likely similar to those used during the time Shabeeny resided in the city. Possibly, the similarly-shaped constructions in the drawing above are ovens (or, very small hovels for poorer members of the population). Source: Wikipedia

Property is fenced by a bank and a ditch. Dews are very heavy. Lands are watered by canals cut from the Nile [the Niger River was commonly thought to be a branch of the Nile until well into the Nineteenth Century] high lands by wells, the water of which is raised by wheels worked by cattle, as in Egypt [This would be a saqiya – but I think Johnson is incorrect; most likely  a shaduf was used – see pictures and further discussion below ]…

Boy using a shaduf water-lifting device in Egypt, 19th Century.   This is most likely the  device that  Sabeeny was trying to describe.  Source: unknown 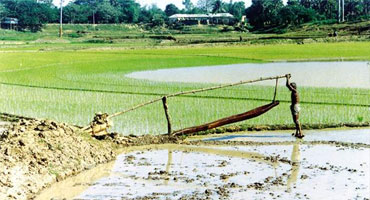 Water lifting device, similar to a shaduf, used today in the Niger floodplains – In this photo, irrigating rice.   Source: fadama.net

The farming system used is called fadama, and is still employed throughout the Niger floodplain (above picture) and elsewhere in West Africa.  I suspect this was a technique brought back from Egypt by pilgrims returning home from the Hajj, as both the farming system (fadama) and the water-raising technology (shaduf) are basic to Egypt farming.  It is possible that the word fadama is a corruption of the Arabic word faddan, which is the basic unit of land measurement in Egypt, being 1.038 acres / 0.42 ha.  The fadama plots that I saw when working in the Niger floodplain were all small – i.e., about a faddan in size. 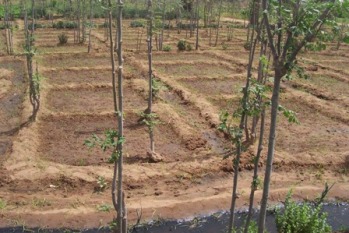 Fadama cultivation; seeds have been sown and the little plots have been watered.   Source: fadama.net 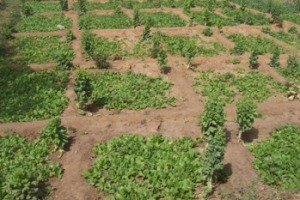 They begin to sow rice in August and September, but they can sow it at any time, having water at hand: he saw some sowing rice while others were reaping it. El bishna and other corn is sown before December. El bishna is ripe in June and July; as are beans. Allila may be sown at all seasons; it requires water only every eight or ten days.  Their beans are like the small Mazagan beans, and are sown in March; the stalk is short, but full of pods. The allila produces a small, white, flattish grain.

[The rice would be the indigenous Oryza glaberrima, found throughout the Niger floodplains.]

Rice is their principal food, but the rich have wheaten flour from Fas [also from Morocco], and make very fine bread, which is considered a luxury. Bread is also made from the axilla.

They roast, boil, bake, and stew, but make no cuscasoe:

Their meals are breakfast, dinner, and supper. They commonly breakfast about eight, dine about three, and sup soon after sunset. They drink only water or milk with their meals, have no palm wine or any fermented liquor; when they wish to be exhilarated, after dinner, they provide a plant of an intoxicating quality called el hashisha, of which they take a handful before a draught of water….

The difficulty with the narrative is that it was told to a British Consul in Arabic, who then translated it to Mr. Johnson – who published the work.  How many errors of either misunderstanding or simply re-interpreting Hajj Shabeeny’s narrative is of course impossible to determine.

However, there is a good deal of interesting lore and I will put up more information from his text in the future.

With a group of BaTwa (pygmy) women potters, with whom we've worked to enhance production and sales of their wonderful pots - fantastic for cooking and serving. To see the 2 blogs on this work enter 'batwa pots' into the search engine located just above this picture. Blog entries throughout this site are about Africa, as well as about the Middle East and life in general - reflecting over 35 years of work and research in Africa and the Middle East – Come and join me!
View all posts by dianabuja →
This entry was posted in Africa-North, Africa-West, African rice, Agriculture, Caravan routes, Colonialism, Cuisine, Egypt-Recent, Explorers & exploration, Food, History, History-Recent, Indigenous crops & medicinal plants, Livestock, Technology and tagged Africa, Egypt, Gibraltar, Mali, Middle East, Morocco, Niger, North Africa, Tétouan, Tetuan, Timbuktu, West Africa. Bookmark the permalink.

18 Responses to Cuisines and Crops of Africa, 18th Century: Food and Farming in Timbuktu