See on – Africa and Beyond 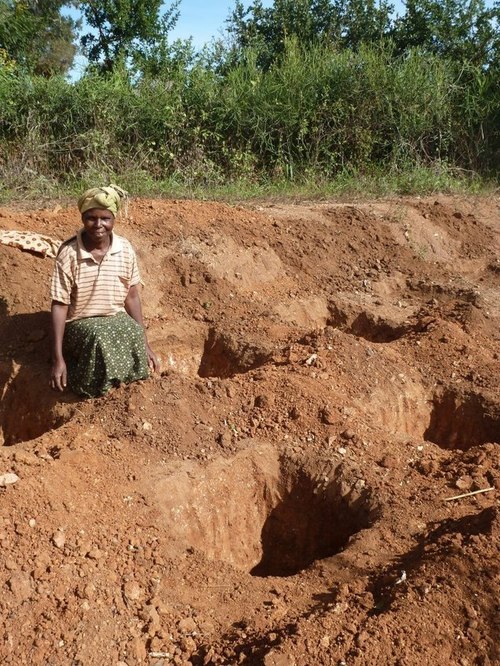 …The impact evaluation found that two-thirds of the farmers in the project are now using new micro-catchments on their farms, and about half started cultivating drought tolerant crops that they weren’t before. Crop yields from zai pits greatly improved, especially for farmers with very arid soils: many reported that their yields tripled or more. And on average, farmers estimated that their families had an additional month of food from their harvests after using the new farming methods, and that this allowed them to spend more money on things other than food – such as buying animals and farming inputs and improving their home.

The zai pits described in this piece are indigenous to parts of the Sudanese Sahel.  They work quite well in water-stressed areas, and I’m glad to see them being introduced in Kenya.

Farm Africa has been doing some interesting work in east Africa.  More than many other NGOs, their follow-up over the longterm is generally quite good.  And that’s where many of the problems of improvements or new technologies being continued are located – lack of ongoing assessment and assistance beyond the two or three years of a project cycle.

With a group of BaTwa (pygmy) women potters, with whom we've worked to enhance production and sales of their wonderful pots - fantastic for cooking and serving. To see the 2 blogs on this work enter 'batwa pots' into the search engine located just above this picture. Blog entries throughout this site are about Africa, as well as about the Middle East and life in general - reflecting over 35 years of work and research in Africa and the Middle East – Come and join me!
View all posts by dianabuja →
This entry was posted in Africa-General, Agriculture, Agroforestry, Climate Change, Development, Humanitarian Assistance, Livestock, Research & Development, Technology and tagged Africa, Agriculture, Climate change, Farm Africa, Farmer, Kenya, Non-governmental organization, Sahel. Bookmark the permalink.