Weddings for the wealthy (or aspiring wealthy) here in Burundi can be extremely elaborate.  If at all possible, the family will rent space at a hotel where entertainment, drinks and food will be provided for upwards of 400 guests.  If that is not possible, the family will arrange the fête at a less expensive locale but may pay an upmarket hotel for having photos taken in their grounds.   These grand events have multiplied now that the war is over.

The following weddings took place at the Hotel Club du Lac Tanganyika on the shores of Lake Tanganyika, a favorite locale for weddings, engagements, and other celebrations. 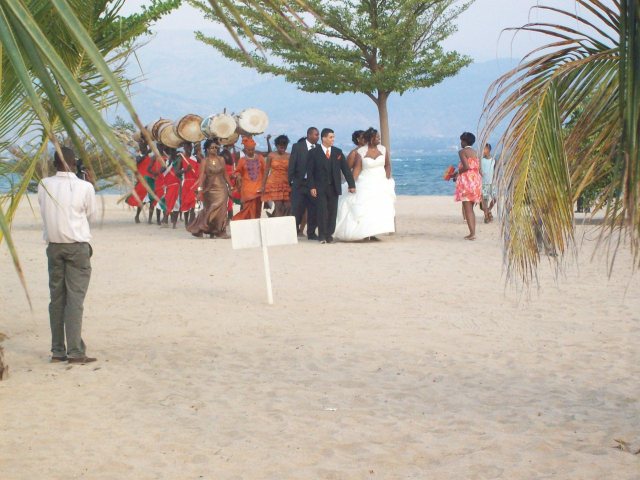 A stroll by Lake Tanganyika with traditional drummers – de rigueur if the family can afford it! 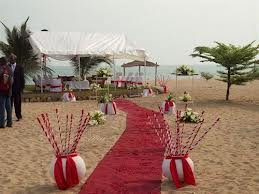 Weddings can be organized on the beach, followed by a meal inside the Hotel restaurant or in one of the traditional huts of the Hotel. Source – ostrovok 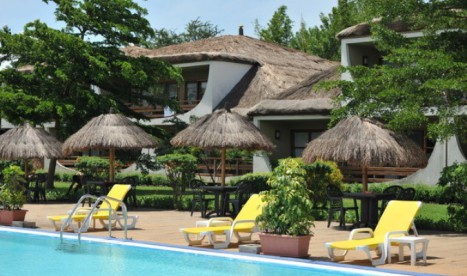 A holiday for the newly weds can be organized in one of the Hotel’s rooms. Source – tralandria.

This is Part III of the blog series on wedding and engagement celebrations in Burundi during the dry season.  The first blog looked at the poor and the second looked at rural notables.  Some background, from the first blog:

July and August are the months of engagements and marriages in Burundi and these are almost always accompanied by feasts that are as lavish as the families can organize. . .

Why July and August?  First, we have  two ‘seasons’ – wet and dry.  Temperatures vary more between night and day than they do between wet and dry seasons, although there is higher humidity during the rainy months, from mid-September through May or June, than there is during the dry season, from approximately June through September.  It is during this long dry season that most celebrations take place.

The second reason that celebrations take place during July and August: The dry season is a time to relax a bit, to enjoy the fruits of the harvest, and to put away money from the crops for important expenses – especially education of the children – and also for celebrations, especially engagements and marriages.

It is also a time for making sorghum beer and banana wine, which especially for women in rural areas are important money-earners – indeed, most people have their favorite producer of these beverages.  Sorghum beer is traditionally consumed as part of engagement or wedding ceremonies.

More on the Urban Elite Marriages > 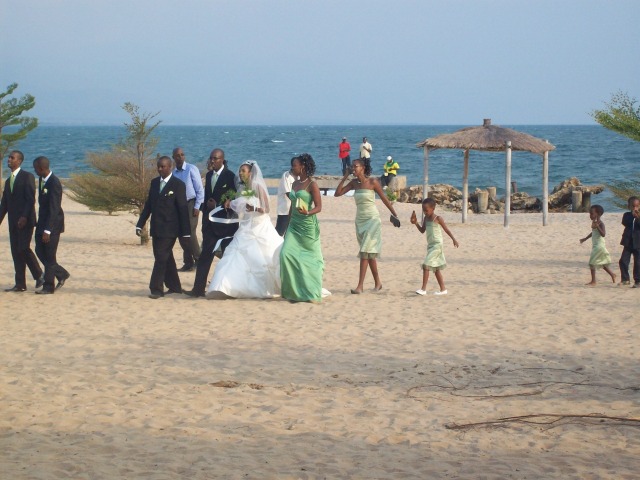 More elaborate weddings may include the walkways being strewn with rose petals, covered with a red carpet, and-or lined with candles, as shown in the following pictures: 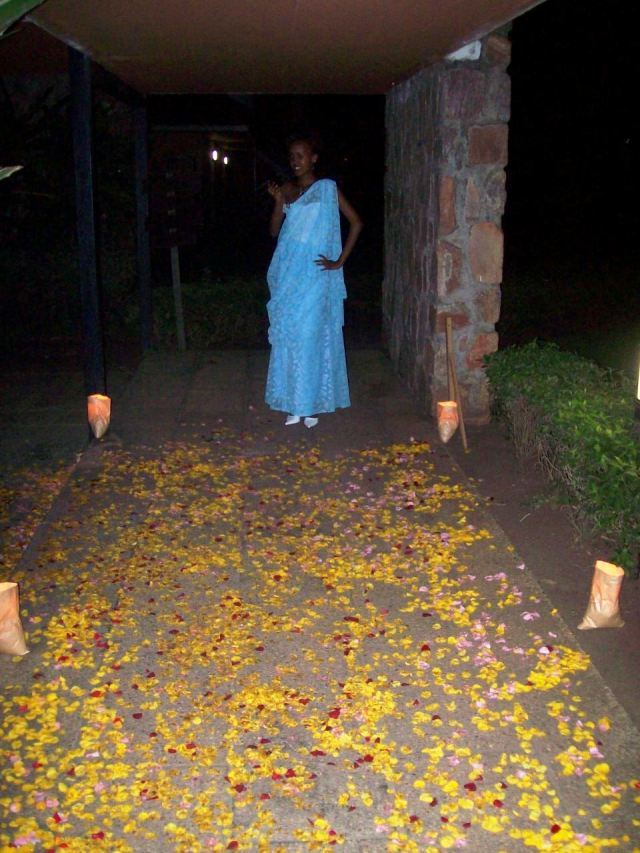 Rose petals – give off a wonderful fragrance as they are walked over.  The dress worn by the hostess is a  traditional style that women often use for fancy events 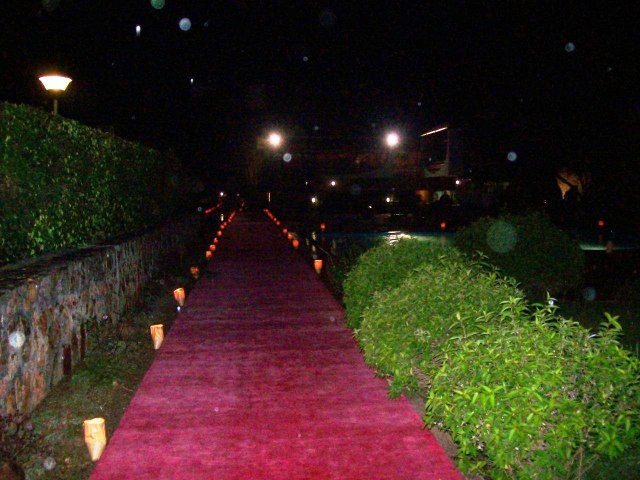 Red carpets and candles leading to the ceremony 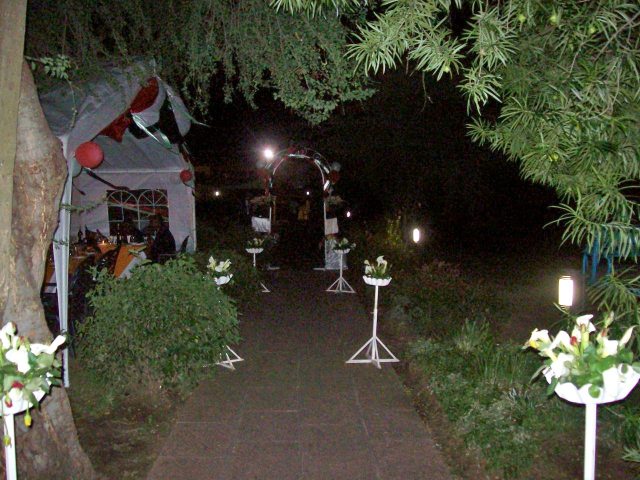 A variety of elaborate decorations along the way may be used 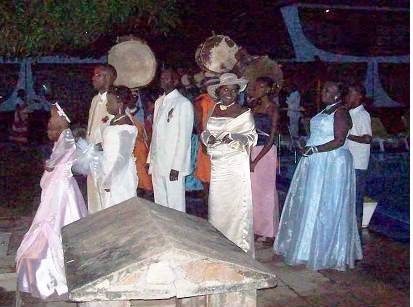 The couple mounts to the area where guests are seated, followed by traditional drummers, who beat their drums while singing. 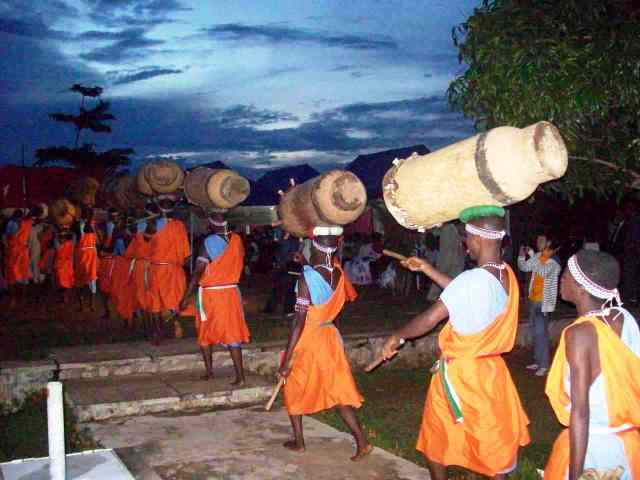 Drummers then come to drum and sing – a traditional feature in weddings together with traditional dancers, if these can be afforded. 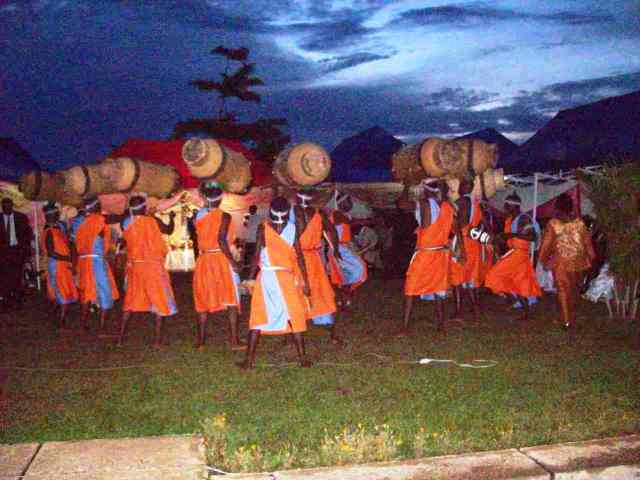 Each drummer takes a turn showing his skills 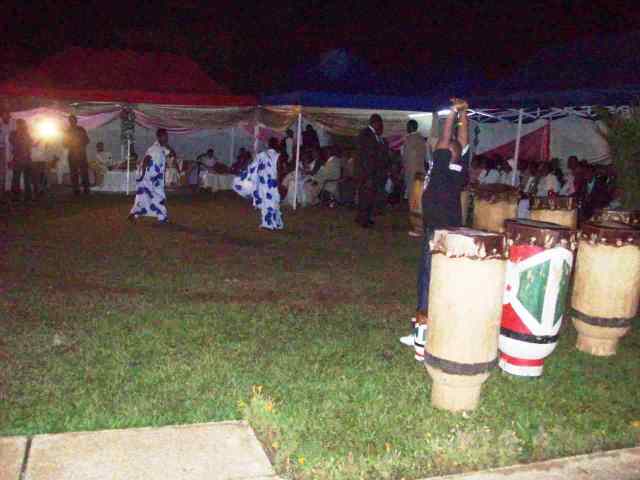 There might also be traditional dancers, both women and men, as also shown in the image at the top of this page.

A really unique wedding took place a while back.  Can you guess what this is going to be? 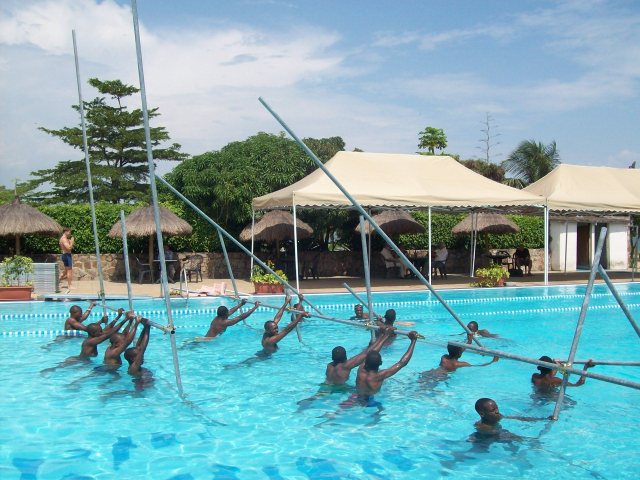 Prenuptial calisthenics? – No, though this did take nearly all of the hotel’s maintenance staff an entire day to arrange.

… And this is what they were constructing – 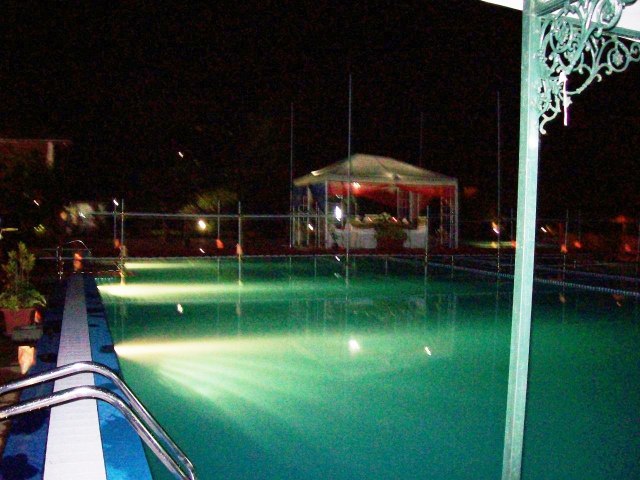 A pavilion in the middle of the swimming pool for the bride and groom, who sat facing the guests 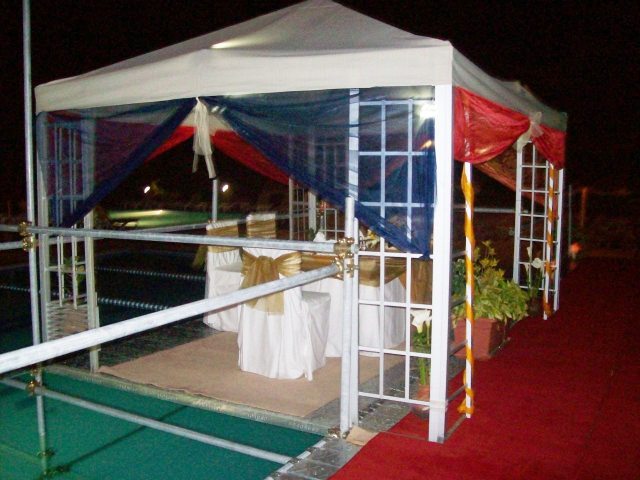 This was truly unique – for Burundi or elsewhere, I imagine

For this spectacular wedding, dinner for over 400 was prepared and served: 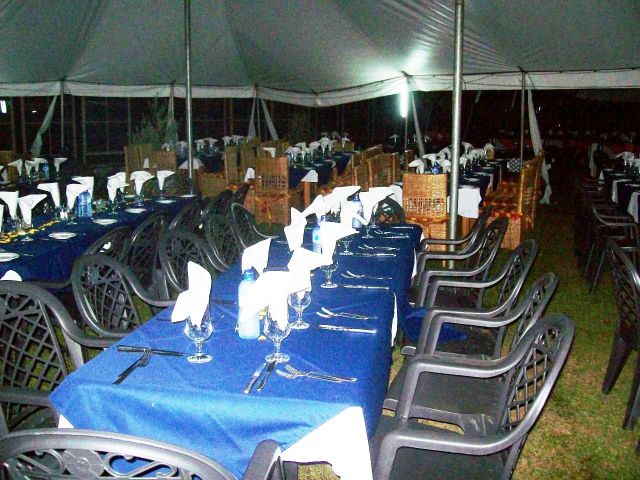 Two, huge adjoining tents were erected in front of the swimming pool 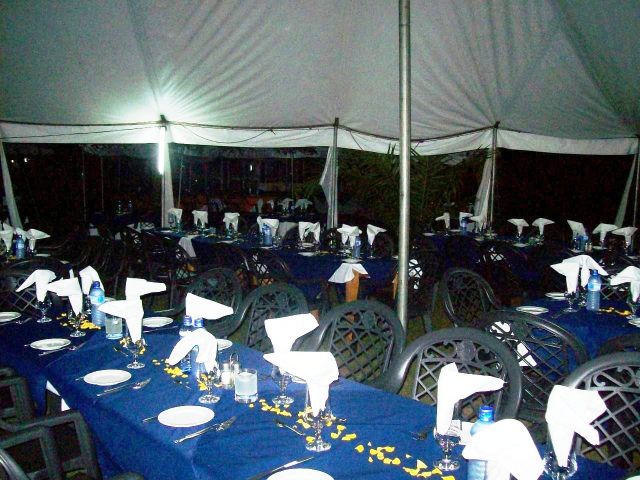 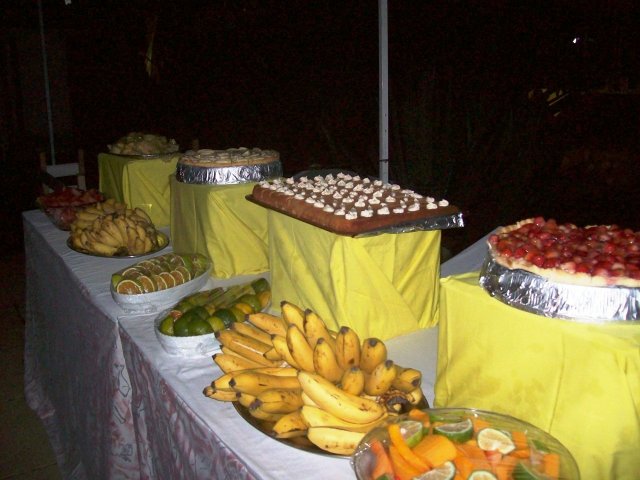 One of the two dessert tables

Another wedding party promenading the beach – while waving to a second wedding party that is closer to the lake (out of the camera range). 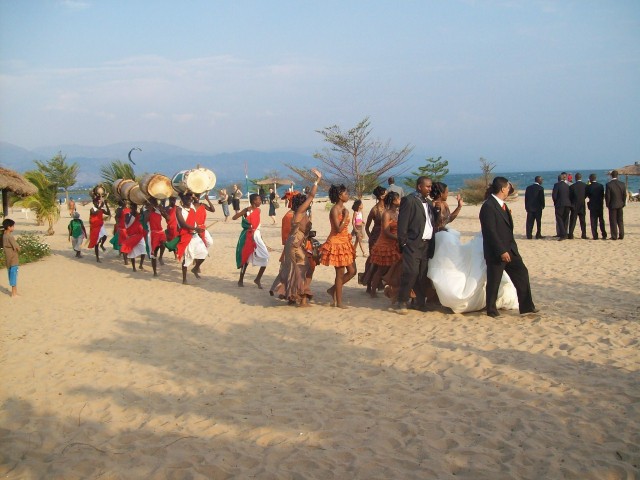 Promenading along the shores of Lake Tanganyika

Here is a menu – that was prepared in the Hotel  kitchen for one of the elaborate weddings: 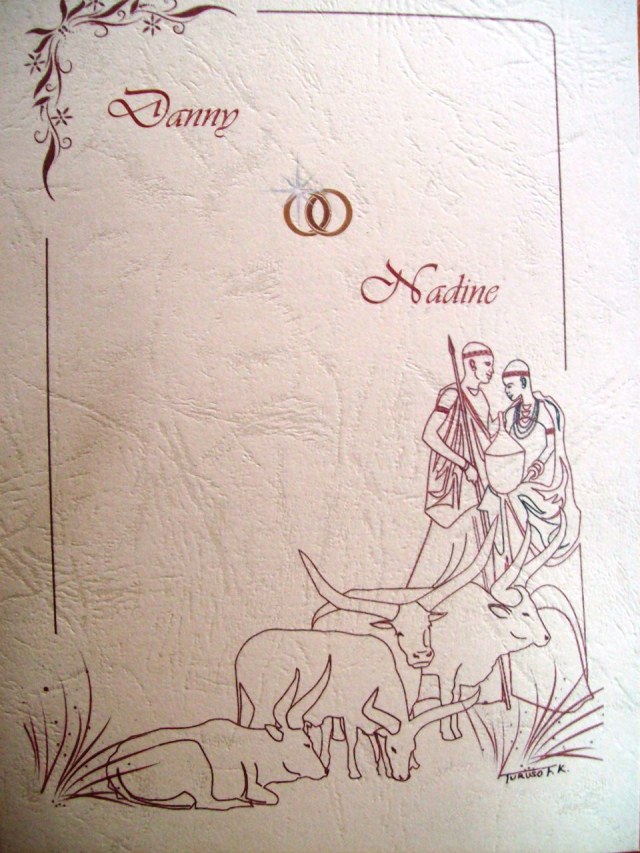 Wedding invitation for the Manager of the Hotel – an artistic depiction of several of the country’s favorite themes:  indigenous, Ankole cattle, traditional garb and baskets of food, associated with traditional [and some modern] weddings. Source – Managing Director Hotel Club du Lac Tanganyika

The following video of a local drumming group shows the ensemble performing for guests at an event here at the Club du Lac Tanganyika.  Traditional drumming is very much a part of Burundi life – not just an event for special occasions – and needs to be seen in that fuller context.  It is traditional for a little boy to be part of the group, and for an elder to lead, as seen here.

Traditional dancing is also a central feature of Burundian social life.  The following video shows a group of students at Université de Sherbrooke (Quebec, Canada) performing Igishakamba, a dance found in northern Burundi.  Dance performances may be part of an event or just performed in one’s own area.

With a group of BaTwa (pygmy) women potters, with whom we've worked to enhance production and sales of their wonderful pots - fantastic for cooking and serving. To see the 2 blogs on this work enter 'batwa pots' into the search engine located just above this picture. Blog entries throughout this site are about Africa, as well as about the Middle East and life in general - reflecting over 35 years of work and research in Africa and the Middle East – Come and join me!
View all posts by dianabuja →
This entry was posted in Burundi, Cuisine, Hotel Club du Lac Tanganyika2, Living here and tagged Burundi, sorghum beer, Wedding. Bookmark the permalink.

5 Responses to The Dry Season in Burundi – Time to Celebrate! III of III (Urban Elite Marriages)