While it is the human-like qualities of primates that attracts us to watch and enjoy them, it is the case that in rural Africa – at least the parts in which I’ve lived and travelled – they are simply considered as an interesting member of forest and savannah life that in some locales are eaten.

In the 19th century, primates begin to appear regularly in travel and exploration literature, with specimens (living, if possible) being taken back to Europe.  The following blog recounts some of the adventures with primates by explorers in the 19th century – as well as contemporary: Monkey Business – 19th Century and Now.

Today I want to explore a concept that has emerged over the last couple of decades with regard to primates in captivity: primate enrichment activities (see link for some literature on the topic.)

At issue – ways to enrich the lives of primates while in captivity.  And it is important, as I learned while in charge of a couple of chimps that the Hotel Club du Lac had acquired.  Keeping these two happy and entertained did require a variety of activities, including the kinds of foods fed (and when fed), and providing different items for play and amusement.  I was lucky to have working for me a former employee of Jane Goodall (when she had a chimp camp down the lake (Tanganyika) to south of us).

[I cannot find all of my primate pictures, but if you look at this link from the blog, you will se us moving the two young chimps to the wildlife sanctuary here in Burundi:  Relocating the Chimps.]

Now one thing that apes and chimps like are hammocks, and as seen in the following pictures they are indeed a favorite place to rest: 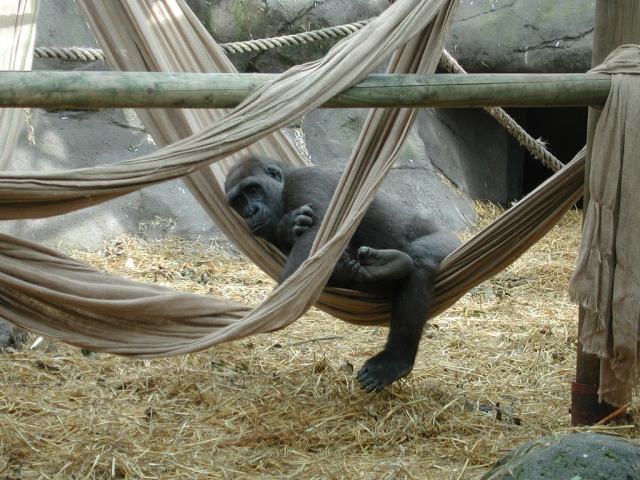 And then there are the little things – providing fresh bedding (pliant branches and straw) every night with which the animals make their nests for sleeping.  Dolls are another favorite (although they are quickly destroyed), blankets, paper, and other objects – see here for other examples.

There are a number of ways that food can be presented so as to be interesting – some examples are given here.  I found that popcorn, as well as whole (unshelled) peanuts were particularly liked, when spread around so that Dragon and his mate, Tina would have to search for them.

Special occasion activities are also enjoyed – here are some examples from a chimp sanctuary in the States:

Hide Objects in Bags: Enrichers place the enrichment items – for example toys, magazines, clothing, shoes) inside bags. They often place bags within other bags and then place the bags in the enclosures.

Clothes Time: Human caretakers place a large selection of clothing inside of the chimpanzees’ enclosure. The chimpanzees … sometimes wear the clothing, nest with it and/or use it in play interactions such as tug-of-war and peek-a-boo.

Source: See the following site for more enrichment activities used by this Sanctuary: Friends of Washoe

Bonobos are a type of primate closely related to chimps, although they are larger and, perhaps, more docile.  David Livingstone, when exploring the area just to the west of us, in the Congo, had what appears (from his drawings) to be a young Bonobo during part of his explorations (his bonobo adventures are discussed in the above blog on the 19th century).

The following chart shows degree of relatedness of primates:

The following video is a TED talk, given by Dr. Susan Savage-Rumbaugh who has spent many years working with Bonobos.  The comments following the video are interesting, as well.

I hope that you all are having a nice and relaxing weekend, as we are, here by the lake:

Articles you may find of interest – the first two are from this blog:

With a group of BaTwa (pygmy) women potters, with whom we've worked to enhance production and sales of their wonderful pots - fantastic for cooking and serving. To see the 2 blogs on this work enter 'batwa pots' into the search engine located just above this picture. Blog entries throughout this site are about Africa, as well as about the Middle East and life in general - reflecting over 35 years of work and research in Africa and the Middle East – Come and join me!
View all posts by dianabuja →
This entry was posted in Africa-General, Chimpanzees, Explorers & exploration, Hotel Club du Lac Tanganyika2, Lake Tanganyika, Living here, Primates, Susan Savage-Rumbaugh and tagged Africa, Bonobo, Burundi, Chimpanzee, chimps, Common chimpanzee, Congo, David Livingstone, enrichment activities, Jane Goodall, Lake Tanganyika, Primate, primate enrichment, primate pictures, primates, Sue Savage-Rumbaugh, Tanganyika, wildlife sanctuary. Bookmark the permalink.