The following story told to the Rev. Nassau contains several features that are characteristic of groups living in the area in which he lived and worked:

In other words, a worthy morality story to be related around home compounds.

Kangou Falls on the Ogooue River, tropical West Africa.  A combination of impenetrable tropical forest and unfriendly waterways contributed to the isolation of groups in Gabon and the surrounding area.  Source – http://www.nature.org

The Rev. Nassau states that –

… the witchcraft [magical] part of the story consists in the strange light which wizards and witches are said to possess; it is under their control to display or hide, and it gives them power to overcome time and space.

There were a husband and wife who had been married a number of years. She had a child, a little boy. The husband had a brother; and this brother had taken a strong fancy to the woman, and wanted to possess her. Secretly he was asking her to live with him. But the woman always refused, saying,

Then this brother’s love began to change to anger. He cherished vexation in his heart toward the woman, and asked her,

“Why do you always refuse me? You are the wife, not of a stranger, but of my brother. He and I are one, and you ought to accept me.”

The brother’s anger deepened into revenge. He possessed nyemba (witchcraft power), and determined to use it. One day this woman had to go to her plantation; and she arranged for the journey, taking her little boy with her. Before she left the village to go to the plantation, she told the townspeople,

“I will remain at the plantation for some days, to take care of my gardens; for I am tired of losses by the wild beasts spoiling my crops.”

But the other women said, “Ah! your plantation is too far; it is not safe for you to be by yourself.” 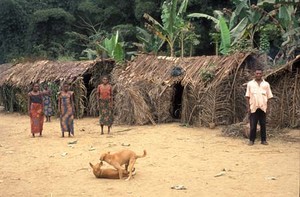 It is claimed that huts of the interior of the Gabon and area of the Ogooue River are square, as shown in this picture.Source –  http://www.delcampe.net

She was brave, and persisted in her plan, and made all preparations.

On a set day, with her basket on her back, her child on her left hip, and her machete in her right hand, she started. She went on, on, steadily; reached the plantation, and rested there the remainder of that day with her child. After her evening meal she shut the door of the hut and went to bed.

The door was fastened with strings and a bar, for the plantation hamlets had no locks. She awoke suddenly about midnight, and thought she heard a noise outside. She listened quietly. Then she heard the sound again. Presently she discovered by the noise that some one was trying to climb upon the top of the hut, for the roof was low.

Soon, then, she observed that this person was trying to break open the palm thatch of the low roof. She still lay quietly. But she remembered a big spear which the husband always kept in one of the rooms of that hut; so she slowly got out of bed, and very softly went to the corner of the room where the spear was standing, and returned to bed with it.

The breaking of the thatch continued.

Soon she saw the room filled with a strange light, and then she saw a man trying to enter the roof head foremost. She bravely kept still, and watched his head and shoulders enter. She could not see his face, and did not know who he was. But she did not wait for certainty; she thrust the spear upward at the man’s head. Immediately the figure disappeared, and she heard a heavy thud as he fell to the ground into the street outside.

She now began to be frightened; she no longer felt safe, and dreaded what might happen before morning. So she began to get ready to return to town that very night. She girded her loin garment, fastened the cloth for carrying her child, took her machete, hasted out of the hut, and started for her village. In her fear she ran, and rested by walking.

Thus, alternately running and walking, she reached the village so exhausted and weak with loss of sleep that when her husband’s door was opened she fell fainting on the floor. He and others were alarmed, and asked,

As soon as she was able to speak, she told the whole story. They asked her,

“Did you see the person? Do you know him?”

She said, “No; only one thing I know: it was a man, and he fell into the street.”

So, when daylight came, the husband and others went to the plantation to see whether they could find the man. When they reached the plantation, they were very much surprised to see that the man was this brother. He was lying dead, with the spear in his neck.

The husband was not vexed at his wife for the death of his brother; he was pleased that she had so well defended herself.

With a group of BaTwa (pygmy) women potters, with whom we've worked to enhance production and sales of their wonderful pots - fantastic for cooking and serving. To see the 2 blogs on this work enter 'batwa pots' into the search engine located just above this picture. Blog entries throughout this site are about Africa, as well as about the Middle East and life in general - reflecting over 35 years of work and research in Africa and the Middle East – Come and join me!
View all posts by dianabuja →
This entry was posted in Africa-West, Agriculture, Ethnography, Gardens, Magic, Missionaries, Robert Nassau and tagged Morality stories, Sorcer, Witchcraft, Women's Gardens. Bookmark the permalink.