What Samuel Baker, Explorer, Can tell Us about Gum Arabic 1 of 3

Gum arabic, the resin of certain acacia trees, has been an important product of east Africa and the Sahel for millennia.  In addition to being traded as far away as India, it is eaten by local animals and has also been a key tree-crop that has been relied upon by indigenous folk and, in past eras, travelers during periods of drought. It is a key export commodity of The Sudan, and thus was a central  focus of the project work in which I was involved  in western Sudan, as discussed here and here .

In this and several other blogs that are being finished, I want to focus on three 19th century explorers who discuss this important gum – Baker; Burton; Speke. The first, by Baker, will be found below:

“A large quantity of gum arabic is collected throughout this country, which sells in Cassala at 20 piastres (4s. 2d.) the cantar of 100 lbs. There are three varieties, produced from various mimosas [Acacia]; the finest quality is gathered in the province of Kordofan, but I subsequently met with large quantities of this species in the Base country… The exports of the Soudan are limited to gum arabic, ivory, hides, senna, and bees’-wax; the latter is the produce of Abyssinia.

“These articles are generally collected by travelling native traders, who sell to the larger merchants resident in Cassala and Khartoum, the two principal towns of the Soudan…

“One of the mimosas yields an excellent fibre for rope-making, in which my people are busily engaged; the bark is as tough as leather, and forms an admirable material for the manufacture of sacks. This business is carried to a considerable extent by the Arabs, as there is a large demand for sacks of sufficient size to contain two hundred and fifty or three hundred pounds of gum arabic (half a camel load). Thus one sack slung upon each side can be packed easily to the animal.

“One of the mimosas (Acacia Arabica) produces a fruit in appearance resembling a tamarind: this is a powerful astringent and a valuable medicine in cases of fever and diarrhea; it is generally used by the Arabs for preparing hides; when dry and broken it is rich in a hard gum, which appears to be almost pure tannin.

“The wild animals have now deserted this immediate neighborhood; the only creatures that are to be seen in numbers are the apes and monkeys: these throng the sides of the river, eating the tamarinds from the few large trees, and collecting gum from the mimosas. These hungry animals gather the tamarinds before they ripen, and I fear they will not leave a handful for us; nothing is more agreeable in this hot climate than the acidity of tamarind water. I remarked a few days ago, when walking along the dry sandy bed of the Till about five miles from the river, that the monkeys had been digging wells in the sand for water.

“Upon one occasion a woman brought me a child of about fifteen months old, with a broken thigh; she had fallen asleep upon her camel, and had allowed the child to fall from her arms. I set the thigh, and secured it with gum bandages, as the mimosas afforded the requisite material. About twenty yards of old linen in bandages three inches broad, soaked in thick gum-water, will form the best of splints when it becomes dry and hard, which in that climate it will do in about an hour.

“We had several times disturbed antelopes during the early portion of the march, and we had just ascended from the rugged slopes of the valley, when we observed a troop of about a hundred baboons, who were gathering gum arabic from the mimosas; upon seeing us, they immediately waddled off. I set Jali’s broken thigh, and employed myself in making splints; …I carefully secured to the long splint with three rows of bandages, the first plain, and the last two layers were soaked in thick gum-water. When these became dry and hard, they formed a case like an armour of paste-board: previous to bandaging the limb in splints, I had bathed it for some hours with cold applications. The immediate neighbourhood was a perfect exhibition of gum-arabic-bearing mimosas. At this season the gum was in perfection, and the finest quality was now before us in beautiful amber-coloured masses upon the stems and branches, varying from the size of a nutmeg to that of an orange.

“So great was the quantity, and so excellent were the specimens, that, leaving our horses tied to trees, both the Arabs and myself gathered a large collection. This gum, although as hard as ice on the exterior, was limpid in the centre, resembling melted amber, and as clear as though refined by some artificial process. The trees were perfectly denuded of leaves from the extreme drought, and the beautiful balls of frosted yellow gum recalled the idea of the precious jewels upon the trees in the garden of the wonderful lamp of the “Arabian nights. 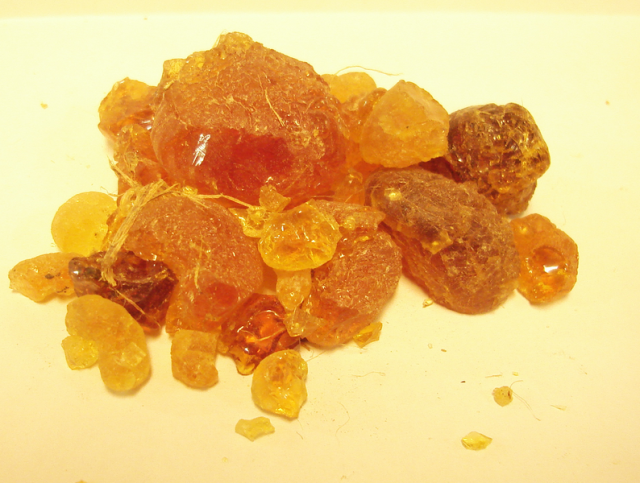 “This gum was exceedingly sweet and pleasant to the taste; but, although of the most valuable quality, there was no hand to gather it in this forsaken, although beautiful country; it either dissolved during the rainy season, or was consumed by the baboons and antelopes. The aggageers [elephant hunters] took off from their saddles the skins of tanned antelope leather that formed the only covering to the wooden seats, and with these they made bundles of gum. When we remounted, every man was well laden…

… “In spite of its unhealthiness and low situation, on a level with the river at the junction of the Blue and White Niles, it [Khartoum] is the general emporium for the trade of the Soudan, from which the productions of the country are transported to Lower [southern] Egypt, i.e. ivory, hides, senna, gum arabic, and bees’-wax. During my experience of Khartoum it was the hotbed of the slave-trade. It will be remarked that the exports from the Soudan are all natural productions. There is nothing to exhibit the industry or capacity of the natives; the ivory is the produce of violence and robbery; the hides are the simple sun-dried skins of oxen; the senna grows wild upon the desert; the gum arabic exudes spontaneously from the bushes of the jungle; and the bees’-wax is the produce of the only industrious creatures in that detestable country.

Source – Samuel W. Baker, The Nile tributaries of Abyssinia and the sword hunters of the Hamran Arabs, 1866.

With a group of BaTwa (pygmy) women potters, with whom we've worked to enhance production and sales of their wonderful pots - fantastic for cooking and serving. To see the 2 blogs on this work enter 'batwa pots' into the search engine located just above this picture. Blog entries throughout this site are about Africa, as well as about the Middle East and life in general - reflecting over 35 years of work and research in Africa and the Middle East – Come and join me!
View all posts by dianabuja →
This entry was posted in Blue Nile, Colonialism, Explorers & exploration, Gum arabic, Sahel, Samuel Grant, Sudan and tagged Abyssinia, Acacia Senegal, Gum arabic, gum arabic tree, Hamran Arabs., mimosas, Samuel Baker, Sir Samuel Baker, Sudan. Bookmark the permalink.

3 Responses to What Samuel Baker, Explorer, Can tell Us about Gum Arabic 1 of 3