In memory of my Dad’s service in World War II, I am re-posting the following blog; he himself would never discuss the events with family or friends..Materials have been added.

My father joined the War late, perhaps not until 1944 due to age (he was too young to join before that time), and then became part of the Combat Corps of Engineers in Europe:

Dad’s induction was followed by crash-training in anti-aircraft and bridging techniques. His was one of the units specialized in combat engineering, which combined fighting and building – particularly of pontoon bridges to replace those destroyed in the fighting or exploded by retreating Germans.  The Corps of Engineers were instrumental at the horrendous Battle of the Bulge in 1944-45, which is discussed in a little video, below.

As a southern boy, his venture up North for induction and training was a mind-blowing experience, as it must have been for many young men of the 1930’s and early 40’s who were moved from areas of relative isolation across the country to military training units.

My father did not like to talk about his war experience.  It had been grim, devastating, and had entailed months of unrelenting movement and fighting.  However, from time to time he would recount one of his war stories.  A couple of favorites are below, together with a few words on what happened once the war had ended.

As far as I know, his group was with the Seventh Army – although as an engineer corps, they could have been moved around:

As part of the troops that swept north into Germany, Dad’s contingent both preceded (in bridge-building) and also followed (after battle victories) the larger combat forces.  One favorite story that he would tell was visiting the home of – and ‘meeting’ Rommel’s widow.  Rommel, of ‘Desert Fox’ fame, was apparently held in awe even by troops at that time, being seen by my father and his compatriots as one of the last ‘gentlemen soldiers’.

At that time, it was still thought that Rommel had died of wounds; the fact of his suicide did not come out until sometime later.  This link leads to an article in which Rommel’s widow ‘confirms’ his death because of his injuries:  The Lewiston Daily, April 27, 1945.

Erwin Rommel shown with his wife and 16-year-old son. This might have been shortly before he took his own life, certainly the strain of the war shows on his and his wife – though their son appears less concerned. Source: incredibleimages4u.blogs.com

2. Night-Time Charley, and other factors of the last months of the war –

In December 1944 and January 1945, to the west of my Dad, the infamous Battle of the Bulge took place, in which thousands of allies and Germans lost their lives.  Videos of ground fighting during that time offer a grim view of trench-life such as Dad experienced – http://www.history.com/topics/world-war-ii/world-war-ii-history/videos/battle-bulge

The following short video, made just 20 years after World War II, gives a picture of military life  at the Battle of the Bulge in late 1944 and early 1945 together with interviews of ex-soldiers.  From time to time Dad would mention episodes such as depicted in he following, though he would not speak in any detail –

Further east, where my Dad and his buddies was busily engaged, allied activities painfully and slowly  continued along lines similar to those in the above video – 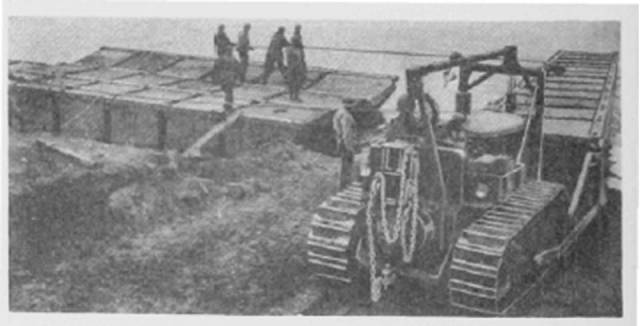 Assembling pontoon bridges with all of the ancillary equipment was a speciality of my dad’s division. Source: The Rhine Crossing.

Building pontoons across the Rhine by the 150th Combat Engineers, 23 March 1945. Source: ww2db.com

Throughout their work in moving supplies and preparing for pontoon bridge construction, every evening, after closing down shop, Dad’s group was strafed by what they considered to be the same plane, which after several days they dubbed ‘Night-time Charley’.

This was tricky.  Unable to sleep under trucks or other equipment in case they were destroyed by ‘Charley,’ refuge was sought wherever there might be a likely spot for a foxhole or other protection.  At the same time, removing the equipment from sight proved equally difficult and generally impossible.

Manning one of the anti-aircraft guns against ‘Charley’ was one of Dad’s chores during this period.  Whether or not he was responsible for ‘Charlie’s’ demise I do not know as Dad would not say.

Crossing the Rhine and advancing into urban areas in (sometimes) hand-to-hand combat, then occupying cities that had been heavily bombed by the Allies, were ‘mopping up’ tasks that my father did not like to talk about.  The destruction, deaths, war refugees, and other related events remained forever undiscussed. 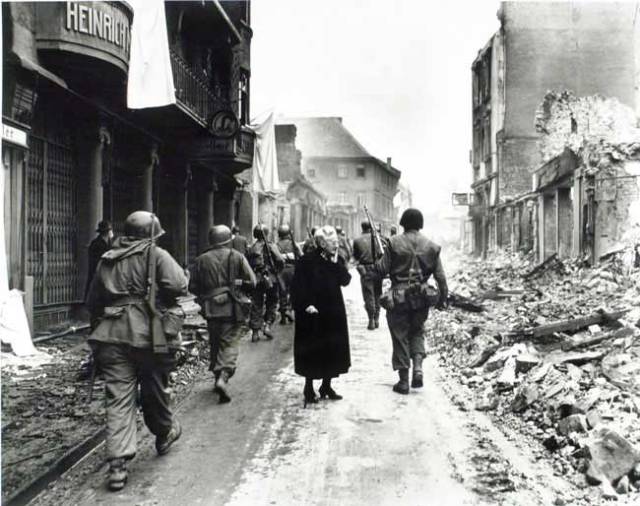 US Seventh Army patrolling a captured town, in the midst of a distressed resident. Source: barewalls.com

Dad always refused to specify the exact urban areas in which he fought, certainly it included some of the cities just to the East of the Rhine River and beyond.  The following entries and photos are about some of those areas and battles in which he may have participated.

February 17, 1945 The western allies continue to attack into Germany as the 1st Canadian Army reached the Rhine River in the north while the US 3rd Army took Saarlouis and the US 7th Army took Saarbrucken.

February 23 The US 1st and 9th Armies open a massive attack in Roer River valley around Julich and Duren. To the south, attacks by the US 3rd and 7th Armies continue to attack.

March 6 The Allies occupy Cologne, Germany.  The tank duel between German and American forces became famous, and here are a few photos from the event taken from Dirk’s Page, which offers a detailed description of the event, together with other pages on WWII.

Crew of Sherman tank on the left trying to help crew across the way. US Army armored div.hist.website. Source: anicursor.com

Burning German Panther tank that had been battling with US forces, by Signal Corps John Himes.  Source: anicursor-com

Crew of the US tank that disabled the German Panther Tank. Source: anicursor.com

March 7 US forces  cross the Rhine on the Remagen bridge over the Rhine, and finalize the capture of Cologne. 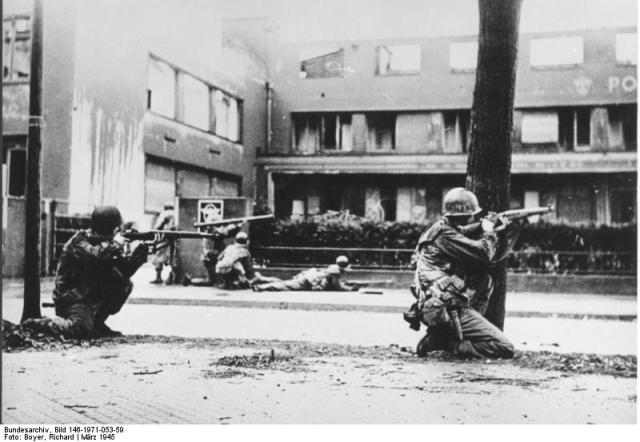 March 15 The US 3rd and 7th Armies launch a coordinated offensive to clear the Saar-Moselle triangle, the last major German holdings west of the Rhine River. To the north, attempts by the US 1st Army to expand their bridgehead at Remagen failed.

March 26 The US 3rd Army makes a headlong advance on the east of the Rhine River, capturing  Darmstadt, closing on the Main River, and making contact with the US 7th Army (still on the west bank) near Worms.

March 29 The Western Allies continue to advance on a broad front as the US 7th Army takes Mannheim and Heidelberg, while the US 3rd Army takes Wiesbaden and Frankfurt. 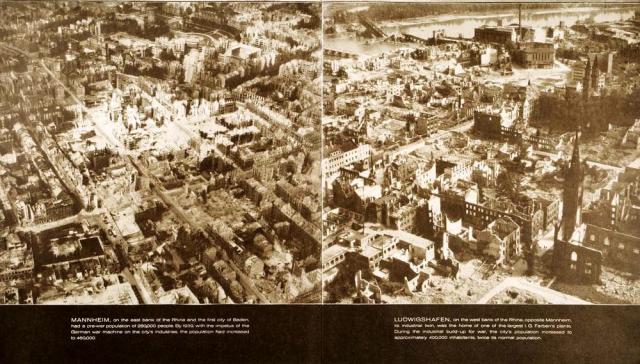 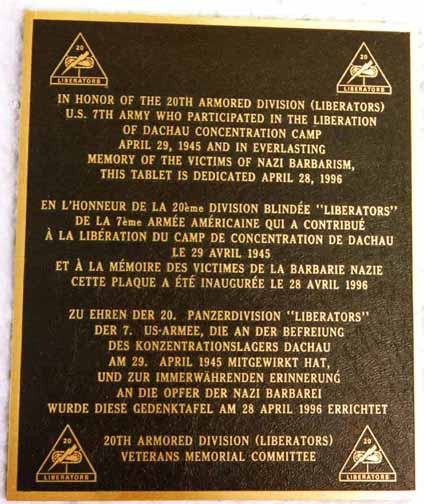 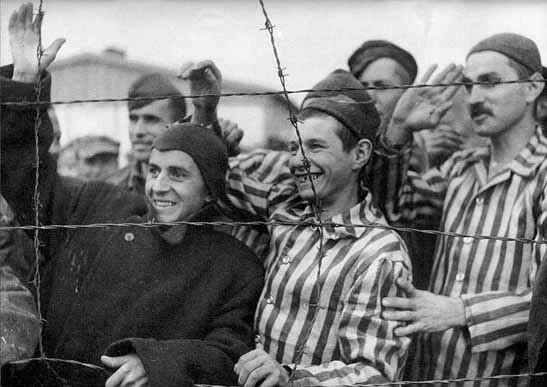 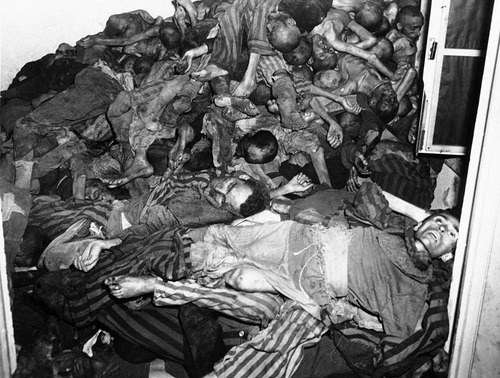 Dachau from the air. Source: scrapbookpages.com

April 18, 1945 The last of the German troops trapped on the Ruhr River surrender.

On returning to the States, Dad brought with him a few little items picked up from ruined cities along the way: two Dainty Dresden saucers, a few small graphics tools, in a little metal case, and a German luger handgun – all carefully packed in his ammunitions strong-box.

As well, a beautiful book in Old German on anatomy with the most intricate figures of the human body,  a male and a female, that folded out so that you could carefully uplift one layer of the interior from another.  At one time he’d considered becoming a doctor.

Taking advantage of the GI Bill, Dad went to university – and what did he major in?  Classical History, and particularly Roman history.  The Gallic wars were a particular favorite, and following months slogging through Europe during the War it is easy to understand why.

Did Caesar or other Roman historians help to answer his questions or quell his angst from the War?  Who knows – as so many returnees, he did suffer from the effects of front line battle and lived out his life peacefully, quietly, and with hardly any discussion of the War.

Divisions of Gall, according to Caesar. Source: athenapubl.com

All of Gaul is divided into three parts, one of which is inhabited by the Belgae, another by the Aquitani, the third by those who in their own language are called Celts, but in ours are called Gauls. Among all of these languages, institutions and laws are different.
The Gauls are separated from the Aquitani by the river Garonne and from the Belgae by the rivers Marne and Seine. Of all of these, the bravest are the Belgae, because they are far away from the culture of our province, because few merchants visit them and bring to them those things which tend to effeminate men’s minds, and because they are nearest to the Germans, who live across the Rhine and with whom they are continually waging war…

“Gallia est omnis divisa in partes tres…,”
Seven words that have become a common enough Latin tag.
Throughout the nineteenth and into the twentieth century, the conventional translation has been that of W. A. McDevitte and W. S. Bohn in 1869: “All Gaul is divided into three parts.” This reads the verb est as a copula, the word divisa as a predicate adjective, fair enough. What could be more limpid and unambiguous?*
Yet the words can actually, and just as naturally, be read as a past perfect passive verb:
“All Gaul has been divided into three parts,”
… and this translation makes a mighty political difference.  Like all passive constructions, it raises an otherwise unspoken question:
—Who did the dividing?
… It might be coincidence that The Gallic War, so obsessed with Germanic incursions into Celtic Roman territory, was a staple of secondary education just during those decades when a more contemporary Germany loomed.
“Next, [Caesar] could see that the Germans were becoming gradually accustomed to cross over the Rhine, and that the arrival of a great host of them in Gaul was dangerous for the Roman people,” Edwards translated in 1917 [ H. J. Edwards in 1917, “Gaul as a whole is divided into three parts”]
Source: Kates-“The Divisions of Gaul,” in: The Harvard Review

How did my Dad interpret Caesar and the divisions of Gaul?  We will never know.

With a group of BaTwa (pygmy) women potters, with whom we've worked to enhance production and sales of their wonderful pots - fantastic for cooking and serving. To see the 2 blogs on this work enter 'batwa pots' into the search engine located just above this picture. Blog entries throughout this site are about Africa, as well as about the Middle East and life in general - reflecting over 35 years of work and research in Africa and the Middle East – Come and join me!
View all posts by dianabuja →
This entry was posted in Army Corps of Engineers, Germany, Memorial Day, War Games, World War II and tagged Allies of World War II, Aquitani, Battle of the Bulge, Belgae, Celts, Erwin Rommel, France, Gaul, German, Germany, Hitler, Julius Caesar, Normandy, Rhine, Rhine River, Rommel, United States Army, Western Allies, World War II. Bookmark the permalink.